The Hugh Hewitt "Reread books" question  made me realise that I've read a lot of books, and in fact I have reread almost all of them. The real question is whether I have reread them enough times to have significant sections committed to memory or not. Anyway I thought it might be fun to pass on some of my opinions of the books I read and reread, whether or not they have actually been committed to memory or not.

Some ground rules: It is fair to say that I am not going to review a book I didn't like. Even if I come across as harsh that does not indicate that I did not like the book, just that I think it could have been better. The vast majority of books I review will be SF/Fantasy and, if recently written, probably published by Baen. There is no message in that either except that Baen publishes the sort of books I like. 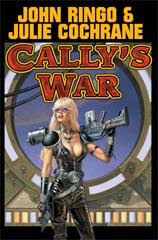 Published by Baen books, October 2004 - ISBN: 0-7434-8845-8
This book turned up as a surpise NY Times bestseller and there is good reason for this. The book is a veritable dark chocolate truffle of a story. Bittersweet but distinctly moreish. And better than a chololate truffle you can reread it and find new reasons to like it.

The book is set in John Ringo's Posleen Universe and contains some of the characters of his previous works in the series. The heroine, Cally O'Neal, was last encounted as an incredibly cute but deadly 13 year old. This book is about events some 40 years later. In that time the Posleen threat to Earth has been drastically reduced - there are feral Posleen but no god-kings, technically aware or not - and the Human elements of the Fleet and Fleet-Strike are occupied in cleaning up other Posleen inhabited worlds to make them safe for colonization by Humans or one of the other species in the Galactic Federation. However just because the overt threat has been controlled doesn't mean that humanity is entering a golden age without problems, the covert threat - the Darhel who run the Galactic Federation - are still both active and generally doing their best to keep Humanity under some sort of control.

Cally has been working for the secretive anti-Darhel Bane Sidhe for the entire time between the end of Hells Faire and the start of this book. She has become one of their star assasins, killing those humans that seem to be excessively keen on the Darhel and others who deserve it. Because of the rejuvenation medicines she has spent most of that time looking like a cute 20 something girl, with occasional changes to help her make covert insertions, and, just as with Oscar Wilde's Dorian Gray, she has apparently exchanged eternal youthfulness for a stunted, crippled soul. She has a bare handful of friends, and those were people she got to know 40 years ago, but no other relationships. She has boytoys for one night stands but seems incapable of finding, indeed even starting the search for, a soulmate. This book is partly a love story about how the ice maiden finds a worthy swain and what happens next.

This is one of a number of books that I've read recently which discusses the issue of different speeds of aging and the tensions between the short-lived and the long-lived. Although the tensions themselves aren't a major part of the narrative the effect of prolonged youthful life on the human soul is definitely one of the big drivers behind the problem with Cally. After all a "normal" human would have slowed down and aged in 40 years, whereas Cally has remained essentially at her physical peak and therefore capable of continuing her soul destroying work. The catalyst is that Fleet has become aware that they have been penetrated by a subversive organization. Of course they have no idea of the existence of the Bane Sidhe, let alone why they might be interested in spiying on the Fleet. Meanwhile the Bane Sidhe are also uncomfortably aware that someone is leaking information to the Darhel and the Fleet. The Fleet operation to try and track down their leaks is therefore penetrated by both Cally and a Fleet intelligence operative who is trying to track down the Bane Sidhe infiltrator.

There are plenty of amusing details, such as artificially intelligent PDAs with a personality even more lugubrious than Marvin the Paranoid Android's and a sexually harrassing General who really believes in paperwork, as the story builds to its climax. The question is not whether Cally will get laid, she does - frequently, but whether she and her soulmate will resolve their mutual attractions or even admit them to themselves let alone each other. The fact that they both think of the other as being both the enemy and much much younger does not help either to admit their feelings. In parts it's a bit like a Shakespearian comedy with the reader able to see what is hidden to the protagonists, but unlike Shakespeare the authors seem constitutionally incapble of creating an ending of "They lived happily together ever after". Explaining what happens would ruin the book for the reader but it is well worth reading the last few chapters a second or third time to figure out what actually happens....